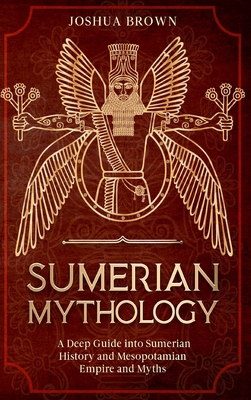 
Available to Ship from Warehouse - usually ships in 6 - 10 days.
(This item cannot be returned.) No refunds or exchanges

Do you want to discover the Sumerian history and mythology that have inspired men and women around the world for thousands of years?

Sumerian history and mythology have been shrouded in mystery for thousands of years. These tales of the world's very first civilization is now being exposed to the light of day, fascinating men and women around the world. The stories of Enlil, Enkidu, and Gilgamesh are finding new audiences, people interested in learning about a world where the people felt and experienced very differently from how we do today. Sumerian mythology was so powerful that some of their gods found their way into different cultures, the most famous example of this being Aphrodite who began life as the Sumerian goddess Inanna.

Sumerian civilization has become an intrinsic part of how we live today, even if most of us are unaware of it. The way that we measure time, observe the stars, and even plant and grow crops has a lot to do with the advancements made by the Sumerians more than six thousand years ago. And heroes like Gilgamesh have helped define what it means to be a hero today. They were men who became gods, earning their place in immortality in more ways than one. The Sumerians used their stories as a way to instruct others and how they lived and even to help themselves understand their world.

This book explores the tales of gods and heroes in a concise, easy-to-read fashion. These tales of heroes and gods were deeply important to the Mesopotamian people and learning about them is the only way to understand the kind of world they lived in and how it was different from our own. It was a world of birds with the faces of lions, gods with the wings of birds, and seductive goddesses who symbolically married the kings of the various city-states. The Sumerians told many tales of gods like Inanna, An, Ashur, and Enlil, tales that helped the civilizations of Mesopotamia endure for nearly 4000 years. Indeed, European travelers to the Orient in the 18th century discovered that there were still districts where the goddess Inanna (more than five thousand years old then) was still worshipped in secret.

The world of the Sumerians was unlike our own. The people at the heart of Sumerian civilization - living in modern-day Iraq, Kuwait, Turkey, and other places - these people were part of a culture so far removed from the way that we think and perceive today as to be almost unrecognizable. This book gives you the binoculars to view their world. It was a world of great empires: the Akkadian, Hurrian, Assyrian, and Babylonian. It was a world of legendary wealth and beauty. In Sumerian Myth, you will understand this world by gaining a summary of the major historical events and an in-depth exposure to the gods.

You will learn about the Gilgamesh and Enkidu, the Anzu bird, who the major gods and goddesses were, who the important heroes were, and how Sumerian society left a legacy that continues with us today. Poets and historians recorded Mesopotamian tales on cuneiform tablets, but we have made the deciphering work easy for you.