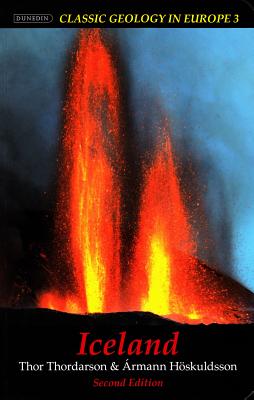 By Thor Thordarson, Ármann Höskuldsson
Product may not be available.

A concise and authoritative field guide to an exceptional natural laboratory, this title in the Classic Geology in Europe series is an essential companion for those visiting Iceland to observe the Earth in action. Rifting of the crust, volcanic eruptions and glacial activity are among a host of processes and features to be observed in this fascinating land.
Nowhere else on Earth is the volcanic and tectonic architecture of seafloor rifts better exposed. Large icecaps and extensive river systems grind down the volcanic pile at rapid rates, dispersing and forming thick sequences of sediments. These formations are further modified by the pounding waves of the North Atlantic causing intriguing landforms that exhibit an intricate balance between the construction and erosion of land. Iceland is the only part of the North Atlantic Large Igneous Province that is still active and the only place on Earth where the construction of such provinces can be observed directly. As such, it is a window into the formation of proto-continents early in the Earth’s history. For the past seven million years Iceland has been situated at the boundary of major air and ocean masses and has consequently been exposed to extreme climate changes. The effects of the climate on the rock-forming processes are clearly illustrated by diverse sedimentary and volcanic successions and by the wide range of volcanic landforms formed in sub-aqueous to sub-aerial environments; each succession reflecting the characteristics of internal and external processes.

Icelandic culture cannot be fully comprehended without understanding its geology. Thus the book will interest not only student, amateur and professional geologists but also others attracted by the natural environment and seeking a deeper understanding of what makes Iceland the unique place that it is.

'This is a lovely pocket-sized guidebook with a wealth of geological detail on places to visit in Iceland and with clear information on specific sites and places of interest along the way. It would be a welcome and affordable addition to anyone’s bookshelf.'
The Open University Geological Society Journal.‘the book is highly recommended for geo-tourists visiting Iceland, both for individual travellers and for those participating in organized tours. As noted on the back cover of the book, it is ‘a concise and authoritative field guide to an exceptional natural laboratory’. The book is essential for planning trips and during geoscience travels in Iceland. It can be used by students, amateurs and professional geologists, as well as by others interested in natural history.’ Boreas

END_OF_DOCUMENT_TOKEN_TO_BE_REPLACED

This feature require that you enable JavaScript in your browser.
END_OF_DOCUMENT_TOKEN_TO_BE_REPLACED

This feature require that you enable JavaScript in your browser.
END_OF_DOCUMENT_TOKEN_TO_BE_REPLACED

This feature require that you enable JavaScript in your browser.
END_OF_DOCUMENT_TOKEN_TO_BE_REPLACED