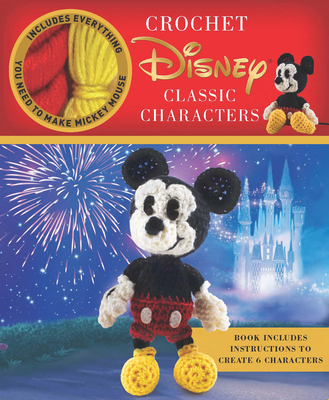 Cuddle up with crochet characters from your favorite classic Disney cartoons! Mickey and Minnie Mouse, Daisy, Pluto, Dumbo, and Bambi are as fun to create as they are to give as gifts. Step-by-step directions and full-color photos in the instruction book help you make sure every stitch is correct. Kits also include all the yarn required for the featured character, stuffing, safety eyes, a crochet hook, and a needle and thread. Hook your friends on all six of these adorable figures!
Megan Kreiner grew up on Long Island, New York, in a home where art and art projects were a daily part of life. Coming from a long line of knitters and crocheters, Megan learned the craft at an early age from her grandmother, her aunt, and her mother. As of 2012, her MK Crochet pattern line has been published and featured in books and various crochet and knitting magazines. Inspired by her early love of Disney movies, Megan also pursued a career in the feature animation industry in Los Angeles, California, and currently works as an animator. Megan lives in Altadena, California.