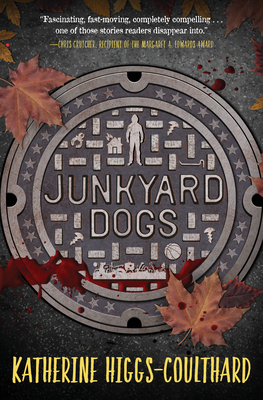 Josh's father has gone missing without a trace, and Gran's ready to call social services. If Josh wants to keep himself and and his little brother, Twig, out of the system, he'll have to take to the streets and track down his dad. But when Josh digs too deep, his dad's old accomplices catch up to Josh and plunge him into a dangerous underground where putting his trust in the wrong person could number Josh in a growing pile of bodies.

This chilling portrayal of a teen desperate for food, shelter, and safety  barrels the reader through an emotionally-charged journey as Josh discovers that blood doesn't always make family—and some bonds can be broken forever.
Katherine Higgs-Coulthard became a writer on the limb of a Sycamore tree when she was in elementary school. Since then she’s written in abandoned buildings, cemeteries, parks, and even on a tall ship, but her favorite place to write has always been the woods. Kat graduated from the University of Nebraska with a bachelor's in education and earned a master's degree from Indiana University, before completing her doctorate in Education through Northeastern University. She has taught kindergarten, third, and fifth grades. Now she trains teachers at Saint Mary’s College and offers writing camps and classes for children and teens through Michiana Writers’ Center. She lives in Michigan and loves spending time with her family. Follow Kat on Twitter @michianawriter1.
"Higgs-Coulthard delivers a gritty, emotionally nuanced read about an unhoused teen searching for his absent father. . . . Utilizing atmospherically tense prose and layered, moving characterizations, this melancholy novel showcases one teen struggling to cultivate a better life for himself while navigating financial precarity and personal betrayal."—Publishers Weekly