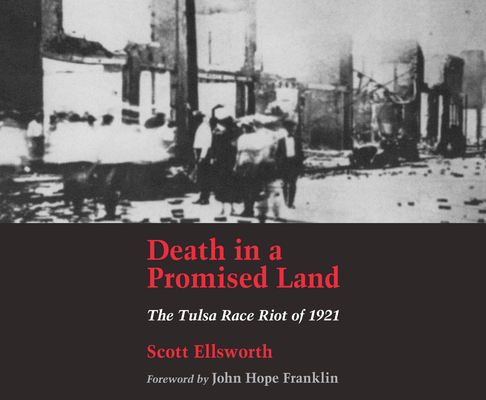 Widely believed to be the most extreme incidence of white racial violence against African Americans in modern United States history, the 1921 Tulsa Race Massacre resulted in the destruction of over one thousand black-owned businesses and homes as well as the murder of between fifty and three hundred black residents. Exhaustively researched and critically acclaimed, Death in a Promised Land is the definitive account of the Tulsa race riot and its aftermath, in which much of the history of the destruction and violence was covered up. It is the compelling story of racial ideologies, southwestern politics, incendiary journalism, and an embattled black community's struggle to hold onto its land and freedom. More than just the chronicle of one of the nation's most devastating racial pogroms, this critically acclaimed study of American race relations is, above all, a gripping story of terror and lawlessness and of courage, heroism, and human perseverance.

END_OF_DOCUMENT_TOKEN_TO_BE_REPLACED

This feature require that you enable JavaScript in your browser.
END_OF_DOCUMENT_TOKEN_TO_BE_REPLACED

This feature require that you enable JavaScript in your browser.
END_OF_DOCUMENT_TOKEN_TO_BE_REPLACED

This feature require that you enable JavaScript in your browser.
END_OF_DOCUMENT_TOKEN_TO_BE_REPLACED