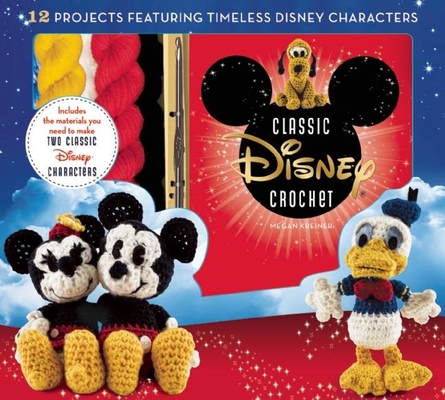 Out of Print - The publisher has officially designated the book as out of print.
Re-create classic Disney characters in adorable yarn form.

A 2015 Parents’ Choice Fun Stuff Award Winner
If you wish upon a star for a whole cast of crochet classic Disney characters, you’re in luck. Disney Classic Crochet includes everything necessary to begin creating beloved Disney characters—Mickey, Minnie, Dumbo, Jiminy Cricket, Bambi, and even Chip and Dale. With a paperback book complete with photos and step-by-step instructions, this kit includes five colors of yarn, a crochet hook, eye beads, a needle, embroidery thread, felt, and stuffing. Providing enough materials to assemble two adorable characters, the kit offers complete instructions for twelve huggable Disney critters.
Megan Kreiner grew up on Long Island, New York, in a home where art and art projects were a daily part of life. Coming from a long line of knitters and crocheters, Megan learned the craft at an early age from her grandmother, her aunt, and her mother. As of 2012, her MK Crochet pattern line has been published and featured in books and various crochet and knitting magazines. Inspired by her early love of Disney movies, Megan also pursued a career in the feature animation industry in Los Angeles, California, and currently works as an animator. Megan lives in Altadena, California.