I Am Alfonso Jones (Paperback) 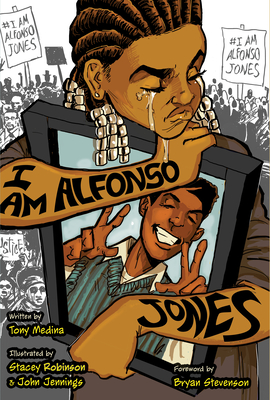 I Am Alfonso Jones (Paperback)

The Hate U Give meets The Lovely Bones in this unflinching graphic novel about the afterlife of a young man killed by an off-duty police officer, co-illustrated by New York Times bestselling artist John Jennings.

Alfonso Jones can't wait to play the role of Hamlet in his school's hip-hop rendition of the classic Shakespearean play. He also wants to let his best friend, Danetta, know how he really feels about her. But as he is buying his first suit, an off-duty police officer mistakes a clothes hanger for a gun, and he shoots Alfonso.

When Alfonso wakes up in the afterlife, he's on a ghost train guided by well-known victims of police shootings, who teach him what he needs to know about this subterranean spiritual world. Meanwhile, Alfonso's family and friends struggle with their grief and seek justice for Alfonso in the streets. As they confront their new realities, both Alfonso and those he loves realize the work that lies ahead in the fight for justice.

In the first graphic novel for young readers to focus on police brutality and the Black Lives Matter movement, as in Hamlet, the dead shall speak-and the living yield even more surprises.

Foreword by Bryan Stevenson, Executive Director of the Equal Justice Initiative and author of Just Mercy

Tony Medina is the author of six beloved books for young readers, as well as multiple volumes of poetry for adults. A Pushcart Prize-nominated poet and a professor of creative writing at Howard University, Dr. Medina is a two-time winner of the Paterson Prize for Books for Young People. He lives in the Washington, DC area. John Jennings co-edited the Eisner-nominated anthology The Blacker the Ink. He is a professor of media and cultural studies at the University of California, Riverside, and the Nasir Jones Hiphop Fellowship at Harvard's Hutchins Center for African & African American Research. Jennings lives in California. Stacey Robinson is an assistant professor of graphic design at the University of Illinois and an Arthur Schomburg Fellow with an MFA from the University at Buffalo. As part of the team "Black Kirby," he works with fellow artist John Jennings to create graphic novels, gallery exhibitions, and lectures that deconstruct the work of comic book legend Jack Kirby into re-imagined Black resistance spaces inspired by hip-hop, religion, the arts, and sciences. Robinson lives in Illinois and can be found on Twitter (@ProfSARobinson) and Instagram (@StaceyARobinson).