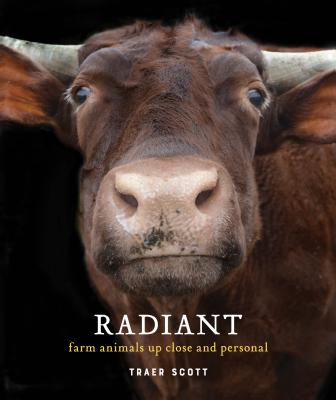 By Traer Scott (By (photographer))


Out of Stock in store and warehouse. Subject to publisher availability
Beautiful portraits of farm animals that bring to life their sparkling personalities and stories.

Photographs of animals — From cows, pigs, sheep, and chickens to Dolly the wooly llama, Bianca the Sicilian miniature donkey, Percy the Indian peafowl, and Justice the yak. Some of the animals are pets; others live happily on farms and sanctuaries.

Heartwarming stories — Traer Scott shares her anecdotes about a Texas longhorn steer whose best friends are a trio of goats, a turkey who likes to snack on grapes and watermelon, and many others.

Informative facts — Did you know donkeys' stubbornness is a well-honed survival tactic? That Scottish Highland cattle are the oldest registered breed of cattle in the world? Scott's captions combine detailed histories of the breeds with the personal sagas to create enchanting tributes to our four-legged (and winged) friends from the farm.

"Photographer Traer Scott's Radiant: Farm Animals Up Close and Personal is a remarkably soulful book of portraits of the beasts we normally take for granted -- or try not to look at too hard. Scott, who has previously created books on shelter dogs, raptors and nocturnal creatures, has assembled a simple and beautiful book of the visages of cows, pigs, sheep, chickens and more exotic animals (a yak, a miniature donkey, as Indian peafowl) that live on farms or as pets."
-Northwest Arkansas Democrat-Gazette

"My newest coffee table book - Radiant: Farm Animals Up Close and Personal by Traer Scott - not only has me entranced with its soulful, stunning photographs of rescued individuals, but I'm learning about the oft-forgotten underdogs who provide the backdrop for this true work of art. The Ameraucana hen, for example, lays different colored eggs!"
- VegNews Magazine

"Photographer Scott (Raptors: Portraits of Birds of Prey), known for her portraits of dogs and wildlife, turns her attention to farm animals in this loving tribute. The elephant (or Jersey cow) in the room, of course, is how many of these species are used for food. Scott doesn't shy away from this topic, nor does she dwell on it. She chooses instead to focus on her subjects, all of whom were photographed under ideal circumstances-close to the humans they know and love, and at the sanctuary farms they call home. This allowed Scott to truly capture the confidence and regality of Henri, a Slate Heritage Breed turkey (favorite snacks: grapes and watermelon) who has assumed the role of caretaker for a flock of chickens; Marcia, a Nigerian Dwarf goat who loved (human) kids; and Buffalo Bill, a gentle, affectionate water buffalo being trained as a therapy animal for autistic children. Each entry begins with an overview of the breed's heritage and key characteristics (the donkey's famous stubbornness, for example, is actually a valuable self-preservation instinct) along with the individual animal's unique traits. Scott's look at these species is equal parts affectionate, informative, and respectful."
-Publishers Weekly

"In her new book, Radiant: Farm Animals Up Close and Personal, Ms. Scott aims to change the perception of barnyard beasts-less living machines, more lovable friends.. Ms. Scott writes about her subjects, "They may not be as outwardly emotive as dogs, as cuddly as cats.but any farmer can tell you that they have just as much personality, even if they're a little less portable and perhaps a mite stinkier."- The Wall Street Journal


"I have a dream of living on an estate with a bunch of farm animals one day, but for now, there are these beautiful portraits of endearing and delightful animals, many of whom were rescued from dire situations. Each photo is accompanied by a biography describing the happy animals' personalities-like Henri the turkey, who loves grapes, or Bean the goat, who sleeps at the foot of his mom's bed."
- BookPage

"The message of Radiant is that farmed animals deserve respect....The book is enjoyable and easy to read because the animals featured are the lucky ones who will not be killed to produce food or clothing. They are companion animals or are living as organically as possible. This is not commonplace for these species, which Scott somberly acknowledges. Radiant presents the lives that all farmed animals could have in a kinder world. It also tells the stories that are not told as much as they deserve to be. For that reason, this book is incredibly important to a world in which factory farming is commonplace. While some may argue against the anthropomorphism and gentle tone, it must be said that it is an effective technique to make animals that are usually objectified engaging and relatable to humans."
- Journal of Animal Ethics,


"Milton Glaser (1929-2020), grandee of them all in art and design, is the subject of a new volume in Moleskin Books’ Inspiration and Process in Design series....The current volume is a tribute to the art of the everyday experience, the moments in which the smallest details become significant."
- DART: Design Arts Daily,


"Scott celebrates farmed animals who have been saved from lives in servitude and are instead living happily in the care of people who see them as friends, not food. These captivating up-close color portraits put us just inches away from our animal friends, showing us every detail of their beautiful faces, and letting viewers into their emotional worlds."
- VegNews