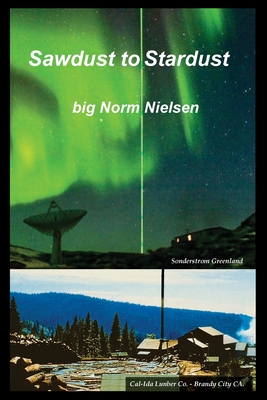 This is a story that begins at the onset of the Second World War when Norm was living in remote sawmill lumber camps and attending one-room schools. He graduated from high school and became a lumberjack, thus the title Sawdust.

The Stardust is our Star the Sun, which affects many things in the atmosphere including the Aurora (Northern and Southern lights), smog, air pollution, and ozone depletion in the Antarctic. Norm's 41-year science career involved all of these things and many more.

This book is written from a nontechnical behind the scene view for the layman.

Growing up living in a Sierra mountain lumber camp Army tent, during the Second World War with a lone light bulb and no indoor plumbing, prepared Norm for a tour of duty in Korea in the 1950's. The air force taught him radio communications electronics right up to the launch of the Russian Satellite Sputnik. Tracking Sputnik experience helped him get a job as an electronics technician, at the prestigious Stanford Research Institute in Menlo Park California. Living on a Yacht in the West Indies tracking the first US missiles down the Atlantic firing range was exciting.

Learning to work with the very first Lasers and build research LIDAR, (Laser Radar) systems for monitoring city air pollution and stratospheric gasses was a rewarding experience. Designing and building mobile van mounted systems for military projects, (nuclear tests) and systems for small aircraft (as well as large, NASA) was a challenging experience.

Norm is thankful to all his well-educated colleagues tutoring and on the job training for 41 years, which allowed this lumberjack to eventually become a Senior Research Engineer.