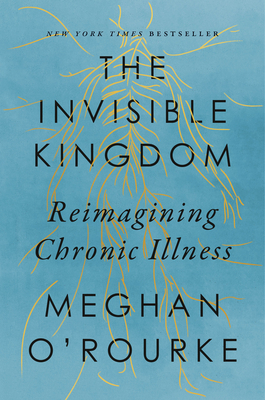 FINALIST FOR THE 2022 NATIONAL BOOK AWARD FOR NONFICTION

Named one of the BEST BOOKS OF 2022 by NPR, The New Yorker, Time, and Vogue

"At once a rigorous work of scholarship and a radical act of empathy.”—Esquire

"A ray of light into those isolated cocoons of darkness that, at one time or another, may afflict us all.” —The Wall Street Journal

A landmark exploration of one of the most consequential and mysterious issues of our time: the rise of chronic illness and autoimmune diseases

A silent epidemic of chronic illnesses afflicts tens of millions of Americans: these are diseases that are poorly understood, frequently marginalized, and can go undiagnosed and unrecognized altogether. Renowned writer Meghan O’Rourke delivers a revelatory investigation into this elusive category of “invisible” illness that encompasses autoimmune diseases, post-treatment Lyme disease syndrome, and now long COVID, synthesizing the personal and the universal to help all of us through this new frontier.

Drawing on her own medical experiences as well as a decade of interviews with doctors, patients, researchers, and public health experts, O’Rourke traces the history of Western definitions of illness, and reveals how inherited ideas of cause, diagnosis, and treatment have led us to ignore a host of hard-to-understand medical conditions, ones that resist easy description or simple cures. And as America faces this health crisis of extraordinary proportions, the populations most likely to be neglected by our institutions include women, the working class, and people of color.

Blending lyricism and erudition, candor and empathy, O’Rourke brings together her deep and disparate talents and roles as critic, journalist, poet, teacher, and patient, synthesizing the personal and universal into one monumental project arguing for a seismic shift in our approach to disease. The Invisible Kingdom offers hope for the sick, solace and insight for their loved ones, and a radical new understanding of our bodies and our health.
Meghan O’Rourke is the author of The Long Goodbye and the poetry collections Sun in Days, Once, and Halflife. The recipient of a Guggenheim Fellowship and other awards, she is the editor of The Yale Review. Her writing appears in The Atlantic Monthly, The New Yorker, The New York Times, and more.


Praise for The Invisible Kingdom:

“The Invisible Kingdom is an important and powerful book in many ways, but perhaps its most valuable contribution is the way it articulates the loneliness and frustration of having symptoms that superficially resemble the pains and pressures of contemporary life in the United States while being much more severe.”—The Nation

“[O’Rourke] gives shape and color to the invisible life of patients whom society has failed. She offers hope for patient-driven change. Most important, she provides an account that many will be able to relate to—a ray of light into those isolated cocoons of darkness that, at one time or another, may afflict us all.” —The Wall Street Journal

“In this elegant fusion of memoir, reporting, and cultural history, O’Rourke traces the development of modern Western medicine and takes aim at its limitations, advocating for a community-centric healthcare model that treats patients as people, not parts. At once a rigorous work of scholarship and a radical act of empathy, The Invisible Kingdom has the power to move mountains.”—Esquire

"[A] personal and deeply moving exploration of life with chronic illness. . .[The Invisible Kingdom] may serve as an affirmation that people living with chronic illness are not alone. . . both moving and educational."—Library Journal, STARRED review

“A call to arms in the fight for compassionate healthcare…The Invisible Kingdom is a medical detective story with the drama and style of The Immortal Life of Henrietta Lacks. O’Rourke’s book has ignited a necessary conversation, proving the pen to be as mighty as the stethoscope.” – Oprah Daily

“Meghan O’Rourke’s book is a searing and thoroughly researched exploration of the pain and confusion that many [chronic illness sufferers] go through in their quest to have their health issues taken seriously by the medical establishment—and, often, the world at large.” —Vogue

“An affecting portrayal of how we view disease, experience illness, and search for healing.” -Booklist, STARRED REVIEW

“With a poet’s sensibility, journalist’s rigor, and patient’s personal investment, O’Rourke sheds light on the physical and mental toll of having a mysterious chronic illness…Readers will be left in awe.”-Publishers Weekly, STARRED REVIEW

“The Invisible Kingdom is a vivid account of the lived experience of chronic illness. Meghan O’Rourke exposes a system of thought in which people with poorly understood illnesses are dismissed and disbelieved, blamed for their own suffering, and left to take desperate risks in pursuit of treatment. Crucially, her perspective offers insight into how we can do better.” –Eula Biss, author of Having and Being Had

“O’Rourke’s honest and insightful account of chronic pain is at once a page-turner and an education in cutting-edge science and the history of ideas. I couldn’t put it down.” – Gretchen Rubin, #1 New York Times bestselling author of The Happiness Project

“In this urgent and beautifully written book, Meghan O'Rourke lays siege to one of the last taboos in medicine: the chronic illnesses that govern the daily lives of millions of people, but are rarely acknowledged. As we confront the long-term impacts of COVID-19, O’Rourke’s lyrical analysis couldn't come at a better time.” – Michael Specter, New Yorker staff writer and author of Denialism: How Irrational Thinking Harms the Planet and Threatens Our Lives

“﻿With impressive clarity and depth, O’Rourke explores the failure of current biological science to identify the causes of numerous maladies or offer effective treatment, leaving a sufferer adrift. Bracing in its intelligence and remarkable in its sweep of both literary and medical scope, this book is essential reading for patients and medical professionals alike.” —Jerome Groopman MD, author of How Doctors Think

“O’Rourke is a poet above all else, and it’s with incredible, lyrical empathy that she not only shares her own story of and eventual diagnosis with late-stage Lyme disease, but puts it in perspective of an entire generation of patients who’ve been dismissed . . . A must read.” —Lithub