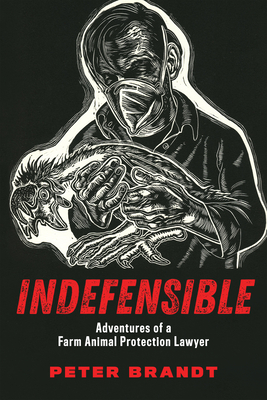 
Available to Ship from Warehouse - Ships in 3 - 6 days.
A Humane Society lawyer uncovers the dirty dealings of America’s factory farms, and shows how we can reimagine farming and our relationship with animals to mitigate the effects of climate change.

Peter Brandt, a litigator at the Humane Society of the United States (HSUS), has been at the forefront of some of the toughest cases of animal abuse in the last ten years—including
supervising a team of lawyers working to protect the interests of farm animals. In this revelatory and often surprisingly funny memoir-cum-manifesto, Brandt describes his growing awareness of the extent of the cruelty of animals in Concentrated Animal Feeding Operations (a.k.a. factory farms), and the manifold harms to human health, local communities, and the environment for those who live near them. He shows how it’s a world of enormous suffering, sustained by deliberate secrecy and misinformation, and reeking of corruption and lagoons full of ordure.

Brandt details his realization of intensive animal farming’s further costs to wild creatures and their habitats, as well as clean water and clean air, and demonstrates how curbing animal agriculture is one of the few ways to make an immediate positive difference to climate change.
Peter Brandt is the Senior Attorney for Farm Animals at the nation’s largest animal protection organization, the HSUS. In 2017, he was a Farm Animal Law and Policy Fellow with Harvard Law School’s Animal Law & Policy Program. As an adjunct professor, he has taught classes on farm animal law and policy at Lewis & Clark’s Northwestern School of Law. His writings on animal protection have been published in the Los Angeles Times, the San Francisco Examiner, and Salon.