House of Rain: Tracking a Vanished Civilization Across the American Southwest (Compact Disc) 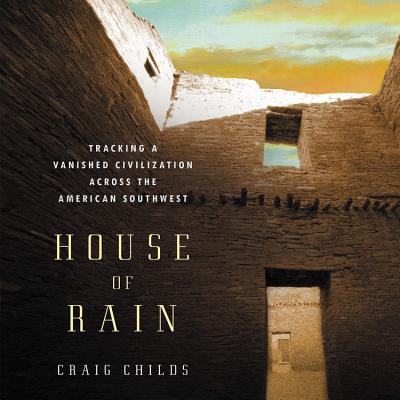 House of Rain: Tracking a Vanished Civilization Across the American Southwest (Compact Disc)

By Craig Childs (Read by)


This item may not be for sale. Contact store for more information.

In this landmark work on the Anasazi tribes of the Southwest, naturalist Craig Childs dives head on into the mysteries of this vanished people.

The various tribes that made up the Anasazi people converged on Chaco Canyon (New Mexico) during the 11th century to create a civilization hailed as the Las Vegas of its day, a flourishing cultural center that attracted pilgrims from far and wide, and a vital crossroads of the prehistoric world. By the thirteenth century, however, Chaco's vibrant community had disappeared without a trace.

Join Craig Childs as he draws on the latest scholarly research, as well as a lifetime of exploration in the forbidden landscapes of the American Southwest, to shed new light on this compelling mystery. He takes us from Chaco Canyon to the highlands of Mesa Verde, to the Mongollon Rim; to a contemporary Zuni community where tribal elders maintain silence about the fate of their Lost Others; and to the largely unexplored foothills of the Sierra Madre in Mexico, where abundant remnants of Anasazi culture lie yet to be uncovered.