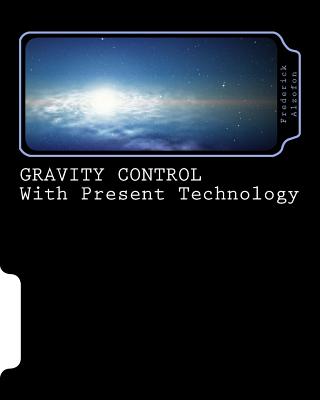 The Holy Grail of physics, gravity control, from theory to applied technology, will be found inside this volume.

The inventor was Dr. Frederick Alzofon (1919-2012), a physicist with a world-class reputation in optics and heat conduction who studied particle physics with J. Robert Oppenheimer and David Bohm, relativity and the scientific method with Victor Lenzen, and applied mathematics with Griffith C. Evans at Cal Berkeley in the 1940s and 1950s.

Alzofon's theory has the virtue of being visualizable and simple enough to communicate with some old-fashioned hand-waving and sketches on a paper napkin. You will find the "paper napkin" lecture here, as well as the advanced physics you would expect. You will also find experimental proof.

The first half of the book considers the implications of the technology for humanity: the conquest of space, a total revamp of terrestrial transportation, and a second Industrial Revolution. It will also reduce the causes of global warming, while drawing the fossil-fuel industry as early adopters. Entrepreneurs and engineers should find this part of the book most appealing.

The second half of the book dives into the nuts and bolts of the theory and technology. Nothing is withheld. Flash: Nothing is secret either -- the technology has been around in full public view since 1981. Why mainstream science ignored it is one of the themes of the book.

In contrast to other books on the topic of "antigravity," this one delivers the goods in terms of known physical science.

If you're not a scientist or an engineer, you will not feel left out. The theme of the book is accessible to all, and it's a popular one: hope for humanity. But here, the hope is based on a world-transforming technology. The time is ripe for a paradigm shift, and this book points the way.

This volume is an update of an earlier book by the same author, How to Build a Flying Saucer (And Save the Planet), occasioned by the publication of The Top-Ten UFO Riddles. The current volume focuses on the science of gravity control, with new chapters on the scientific method and a program to research and develop the technology.