Big Nate: Hug It Out! (Paperback) 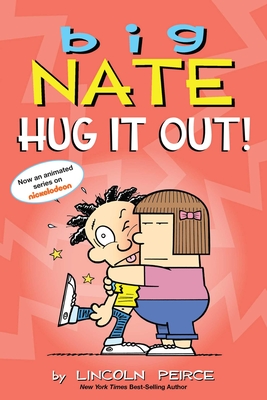 Big Nate: Hug It Out! (Paperback)

This is book number 21 in the Big Nate series.

Now an animated series with Paramount+ and Nickelodeon!
When Nate rides the Flamethrower with a mystery girl at the fair, sparks fly. Nate’s certain he’s just met the love of his life—and then she disappears! Can our lovestruck hero track her down?

Sixth grade is no picnic for Nate Wright. His pal Francis won’t stop bombarding him with useless trivia. A wild pitch knocks him out of a ballgame and into the emergency room. And the only thing standing between Nate and summer school is a study session with the worst possible tutor: his too-obnoxious-for-words arch enemy, Gina. But a chance encounter on an amusement park ride could change everything.

Meanwhile, the troubles are piling up in this hilarious new collection of Big Nate comics, and there may be only one thing for Nate to do: HUG IT OUT! In this brand-new collection of comics from the New York Times bestselling series Big Nate, everyone's favorite sixth-grade prankster is back for more hilarious misadventures—and even a little romance!
Lincoln Peirce has been drawing the Big Nate comic strip for more than 20 years. Born in Ames, Iowa, Peirce grew up in Durham, New Hampshire. As a kid, he began creating his own strips in the sixth grade. Peirce taught high school in New York City and has created several animated pilots for Cartoon Network and Nickelodeon. He lives in Portland, Maine, with his family.