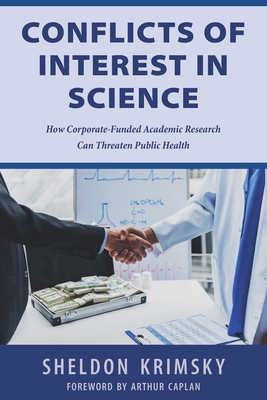 For over 500 years, groups and organizations with political, economic, and personal interests have successfully exercised influence on the pursuit of scientific inquiry and knowledge. History is replete with examples like the Papal authority muddying research into studies of the cosmos, but far less attention is paid today to the various corporate and special interest groups who, through funding and lobbying efforts, have been able to shape the modern academic and scientific landscape to fit their agenda.

In Conflicts of Interest Within Science, author Sheldon Krimsky compiles 21 peer-reviewed, academic articles that examine the complex relationship between the individual scientists conducting research and the groups who fund them. Ultimately, Krimsky’s call to action concerns a collective movement among authors, peer reviewers, corporations and journal editors to disclose the sources of their funding. By holding scientists and the groups that fund them more accountable through increased transparency, we as a society can begin to rebuild trust in the integrity of knowledge.
Sheldon Krimsky is the Carol Zicklin Visiting Professor of Philosophy at Brooklyn College, the Lenore Stern Professor of Humanities and Social Sciences at Tufts University, and adjunct professor in the Department of Public Health and Community Medicine at the School of Medicine at Tufts University. He lives in New York City and Cambridge, Massachusetts.