The Humane Economy: How Innovators and Enlightened Consumers Are Transforming the Lives of Animals (MP3 CD) 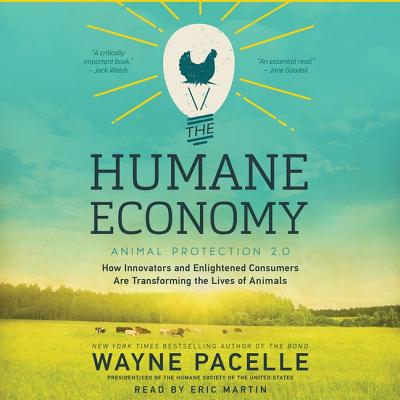 The Humane Economy: How Innovators and Enlightened Consumers Are Transforming the Lives of Animals (MP3 CD)


Email or call for price
A major new exploration of the economics of animal exploitation and a roadmap for how we can use the marketplace to promote the welfare of all living creatures, from the renowned animal rights advocate Wayne Pacelle, president and CEO of the Humane Society of the United States. In the mid-nineteenth century, New Bedford, Massachusetts was the whaling capital of the world. A half-gallon of sperm oil cost approximately $1,400 in today's dollars, and whale populations were hunted to near extinction for profit. But with the advent of fossil fuels, the whaling industry collapsed, and today, the area around New Bedford is instead known as one of the best places in the world for whale watching.This transformation is emblematic of a new sort of economic revolution, one that has the power to transform the future of animal welfare. In The Humane Economy, Wayne Pacelle, president/CEO of the Human Society of the United States, explores how our everyday economic decisions impact the survival and wellbeing of animals, and how we can make choices that better support them. Though most of us have never harpooned a sea creature, clubbed a seal, or killed an animal for profit, we are all part of an interconnected web that has a tremendous impact on animal welfare, and the decisions we make--whether supporting local, nonindustrial farming; adopting a rescue dog or a shelter animal instead one from a puppy mill; avoiding products that compromise the habitat of wild species; or even seeing Cirque du Soleil instead of Ringling Brothers--do matter. The Humane Economy shows us how what we do everyday as consumers can benefit animals, the environment, and human society, and why these decisions can make economic sense as well.