Last Gangster in Austin: Frank Smith, Ronnie Earle, and the End of a Junkyard Mafia (Paperback) 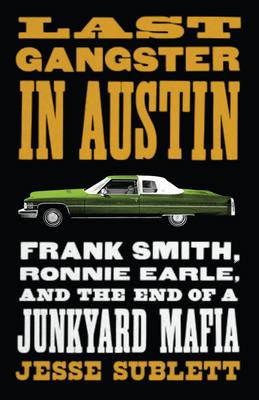 Last Gangster in Austin: Frank Smith, Ronnie Earle, and the End of a Junkyard Mafia (Paperback)

Ronnie Earle was a Texas legend. During his three decades as the district attorney responsible for Austin and surrounding Travis County, he prosecuted corrupt corporate executives and state officials, including the notorious US congressman Tom DeLay. But Earle maintained that the biggest case of his career was the one involving Frank Hughey Smith, the ex-convict millionaire, alleged criminal mastermind, and Dixie Mafia figure.

With the help of corrupt local authorities, Smith spent the 1970s building a criminal empire in auto salvage and bail bonds. But there was one problem: a rival in the salvage business threatened his dominance. Smith hired arsonists to destroy the rival; when they botched the job, he sent three gunmen, but the robbery they planned was a bloody fiasco. Investigators were convinced that Smith was guilty, but many were skeptical that the newly elected and inexperienced Earle could get a conviction. Amid the courtroom drama and underworld plots the book describes, Willie Nelson makes a cameo. So do the private eyes, hired guns, and madams who kept Austin not only weird but also riddled with vice. An extraordinary true story, Last Gangster in Austin paints an unusual picture of the Texas capital as a place that was wild, wonderful, and as crooked as the dirt road to paradise.

Jesse Sublett is an author, musician, and painter in Austin. This is his fourteenth book. He last wrote about the Austin underworld in 1960s Austin Gangsters: Organized Crime That Rocked the Capital. Other notable books include Armadillo World Headquarters: A Memoir (with Eddie Wilson), and his memoir Never the Same Again: A Rock ‘n’ Roll Gothic.


A vividly detailed and stylishly written portrait of an Austin long gone by.
— Kirkus

Take a nostalgic trip back in time to the Austin of the 1970s in this gripping account of corrupt leadership, crime, power, and Texas-sized personalities.
— Austin Monthly

[Last Gangster in Austin] is one of the most egregiously Texas stories, nay, one of the most remarkably Austin stories one could read...fantastic, an often wildly entertaining look at Austin when it really was a bit of an outlaw place.
— Joe Gross

Here's a true-crime story that's every bit as compelling as your favorite pulpy, fictional counterpart...It's a tale replete with genuine heroes, repellent villains, and a slew of supporting characters any self-respecting crime novelist would be proud to have created on the page...Sublett constructs the story with a sharp eye and a hard-boiled flair.
— Jay Trachtenberg

If you pick up just one new Texas history this summer, make it Last Gangster in Austin...Sublett's riveting true-crime story reads like a classic noir novel.
— Austin American-Statesman