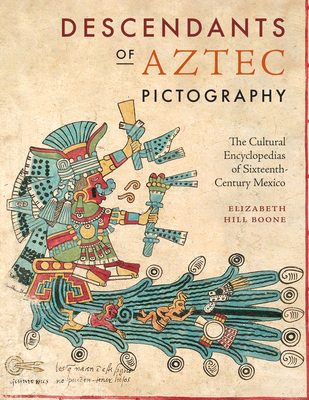 
This item may not be for sale. Contact store for more information.

In the aftermath of the sixteenth-century Spanish conquest of Mexico, Spanish friars and authorities partnered with indigenous rulers and savants to gather detailed information on Aztec history, religious beliefs, and culture. The pictorial books they created served the Spanish as aids to evangelization and governance, but their content came from the native intellectuals, painters, and writers who helped to create them. Examining the nine major surviving texts, preeminent Latin American art historian Elizabeth Hill Boone explores how indigenous artists and writers documented their ancestral culture.

Analyzing the texts as one distinct corpus, Boone shows how they combined European and indigenous traditions of documentation and considers questions of motive, authorship, and audience. For Spanish authorities, she shows, the books revealed Aztec ideology and practice, while for the indigenous community, they preserved venerated ways of pictorial expression as well as rhetorical and linguistic features of ancient discourses. The first comparative analysis of these encyclopedias, Descendants of Aztec Pictography analyzes how the painted compilations embraced artistic traditions from both sides of the Atlantic.

Elizabeth Hill Boone is the Martha and Donald Robertson Chair in Latin American Art at Tulane University. She is the author of many books, including Cycles of Time and Meaning in the Mexican Books of Fate and Stories in Red and Black: Pictorial Histories of the Aztecs and Mixtecs, and the editor or coeditor of eleven books, most recently Painted Words: Nahua Catholicism, Politics, and Memory in the Atzaqualco Pictorial Catechism.
The sixteenth-century conquest of Mexico brought into contact European and Indigenous ways of understanding and recording the world...Boone, through careful observation and detailed analysis, carries out a comprehensive study of the pictorial encyclopedias that were a product of this encounter...Boone’s book presents a model for the investigative power of close observation to decipher the impact of Indigenous forms of knowledge in colonial works. Boone’s clear writing and use of numerous examples make the volume accessible not only to specialists in Mexican manuscripts but also to a broader audience interested in Indigenous traditions, European epistemological projects, and colonial encounters.
— The Art Bulletin

There has simply never been anything that comes close to what Boone has accomplished in this book. Its broad scope, its impeccable scholarship and thoroughness, its revelations of sources such as European costume books, its intelligent analyses, and its persistent questioning of how exactly Aztec pictography both worked and changed through time, make it what is—and will be, for a long time to come—the definitive source on Aztec pictographic encyclopedias.
— Latin American and Latinx Visual Culture

This is a work of rigorous and insightful scholarship, described in clear and readable prose...[Descendants of Aztec Pictography] is a detailed and fascinating study of cultural persistence and change. The sixteenth-century pictorial manuscripts of New Spain were neither fully indigenous nor European colonialist works. Elizabeth Boone’s accomplishment is to disentangle the changing mixture of these traditions as the sixteenth century unfolded. This is an outstanding book...It should be in the library of all Mesoamericanists.
— Journal of Anthropological Research

Boone’s capacious knowledge of the texts themselves and the secondary literature on those texts is on full display [in Descendants of Aztec Pictography] and allows her to craft a sort of guidebook to the pictorial encyclopedia genre...[Boone’s] typology of Mexican manuscript painting, of which this volume is but the latest installment, is what makes her work so foundational to the study of Nahua culture and history.
— Hispanic American Historical Review