B Is for Bison: A National Parks Primer (Board Books) 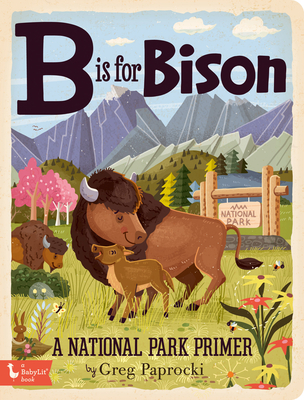 B Is for Bison: A National Parks Primer (Board Books)

Introduce your toddler to 26 national parks found in the United States with this colorful alphabet primer, from the creators of BabyLit.

An engaging collection of illustrations showing amazing features of 26 national parks across the United States. Features of each park include popular animals, landmarks, and scenic views. Have fun reading with your child as you come across letters such as: G for Grand Canyon National Park, L for Lava, O for Old Faithful, and Y for Yosemite National Park. Illustrator Greg Paprocki's popular BabyLit alphabet board books feature his classically retro midcentury art style that's proven to be a hit with both toddlers and adults.

Greg Paprocki works full-time as an illustrator and book designer. He has illustrated several Curious George books, the Little Leonardo series, and the BabyLit alphabet board books including S Is for Santa, B Is for Boo, E Is for Easter and C Is for Camping. Released early last year in the new Count and Find series were Day of the Dead and Christmas. Greg's Gibbs Smith titles have sold over 463,788 copies. He lives in Omaha, NE.