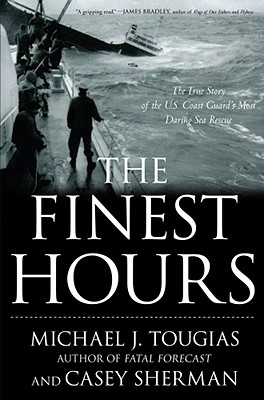 Special Order - This book may not be available for purchase.

In the winter of 1952, New England was battered by the most brutal nor'easter in years. As the weather wreaked havoc on land, the freezing Atlantic became a wind-whipped zone of peril.

In the early hours of Monday, February 18, while the storm raged, two oil tankers, the Pendleton and the Fort Mercer, found themselves in the same horrifying predicament. Built with "dirty steel," and not prepared to withstand such ferocious seas, both tankers split in two, leaving the dozens of men on board utterly at the Atlantic's mercy.

The Finest Hours is the gripping, true story of the valiant attempt to rescue the souls huddling inside the broken halves of the two ships. Coast Guard cutters raced to the aid of those on the Fort Mercer, and when it became apparent that the halves of the Pendleton were in danger of capsizing, the Guard sent out two thirty-six-foot lifeboats as well. These wooden boats, manned by only four seamen, were dwarfed by the enormous seventy-foot seas. As the tiny rescue vessels set out from the coast of Cape Cod, the men aboard were all fully aware that they were embarking on what could easily become a suicide mission.

Not all of the eighty-four men caught at sea in the midst of that brutal storm survived, but considering the odds, it's a miracle -- and a testament to their bravery -- that any came home to tell their tales at all.

Michael J. Tougias and Casey Sherman have seamlessly woven together their extensive research and firsthand interviews to create an unforgettable tale of heroism, triumph, and tragedy, one that truly tells of the Coast Guard's finest hours.

"The Finest Hours is a touching account, a sensitive rendering of what might be called four indescribably chaotic conditions...Tougias and Sherman never sensationalize, never go beyond the facts, and yet capture all the pain, physical and emotional, of the survivors and their families." -- Providence Journal

"This book captures the wit, grit and sacrifice of Coasties and their boats." -- Minneapolis Star Tribune

"Tougias and Sherman reach their peak of tension in the sink-or-swim moments when mariners abandoned ship and chanced their lives on their rescuers' skill and bravery...excellent." -- Booklist

"It's good to know that real heroes exist...incredible." -- Concord Monitor

"Gripping...Tougias and Sherman ably narrate the desperate struggles of crew members on both the wrecks and the rescue boats...will make readers appreciate the bravery of the men who put their lives on the line...action-packed." -- Publishers Weekly

"Look no further for the real-life adventure of the year. The Finest Hours is a rousing page-turner, a fascinating history, and an inspiring ode to the courage and professionalism of men who face bitter winds and black mountainous seas...all to do a dangerous job. Put it on the shelf next to The Perfect Storm. That's where it belongs!" -- William Martin, New York Times Best Selling author of Cape Cod and The Lost Constitution

"Tougias and Sherman have told a mesmerizing story about Coast Guardsmen under the stress of extreme conditions and the self-imposed pressure to perform. The events they describe so vividly occurred in 1952. As extraordinary as the collective performance by the boat crews, cutter crews and aircraft crews were that night, the real miracle is that such performances are timeless." -- James Loy, former Commandant of the United States Coast Guard

"In February of 1952, eighty-four men were in danger of drowning off the coast of Cape Cod when a ferocious Nor'easter split their ships in two. The Finest Hours recounts the incredible heroism of the Coast Guard, who risked their lives to save others. A gripping read." -- James Bradley, author of Flags of Our Fathers and Flyboys

END_OF_DOCUMENT_TOKEN_TO_BE_REPLACED

This feature require that you enable JavaScript in your browser.
END_OF_DOCUMENT_TOKEN_TO_BE_REPLACED

This feature require that you enable JavaScript in your browser.
END_OF_DOCUMENT_TOKEN_TO_BE_REPLACED

This feature require that you enable JavaScript in your browser.
END_OF_DOCUMENT_TOKEN_TO_BE_REPLACED