Baseball's Leading Lady: Effa Manley and the Rise and Fall of the Negro Leagues (Paperback) 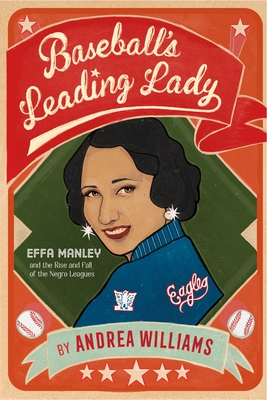 Baseball's Leading Lady: Effa Manley and the Rise and Fall of the Negro Leagues (Paperback)

For fans of Hidden Figures and Steve Sheinkin's Undefeated, Andrea Williams's Baseball's Leading Lady is the powerful true story of Effa Manley, the first and only woman inducted into the National Baseball Hall of Fame.

Here is the riveting true story of the woman at the center of the Black baseball world: Effa Manley, co-owner and business manager of the Newark Eagles. Elegant yet gutsy, she cultivated a powerhouse team. Yet just as her Eagles reached their pinnacle, so did calls to integrate baseball, a move that would all but extinguish the Negro Leagues.

On and off the field, Effa hated to lose. She had devoted her life to Black empowerment--but in the battle for Black baseball, was the game rigged against her?

Andrea Williams is an author and journalist who worked in marketing and development for the Negro Leagues Baseball Museum in her hometown of Kansas City, Missouri, before turning to writing full-time. She now lives and writes in Nashville, Tennessee, with her husband and four children.

“Baseball’s Leading Lady is an intricate, engaging look at Effa Manley’s groundbreaking career, the complex history of the Negro Leagues, and the unwavering talents who changed America’s favorite pastime forever.” —Brandy Colbert, award-winning author of Black Birds in the Sky and The Voting Booth

“Andrea Williams brings the Queen of the Negro Leagues back to life through the pages of this wonderfully written and introspective look at the most important woman in baseball history.” —Bob Kendrick, President, Negro Leagues Baseball Museum

“Andrea Williams comes at the reader like a masterful pitcher with a full repertoire at the ready. She weaves the story of the Negro Leagues with a primer on Black history and, most impressive, a case study in the rise and fall of a successful Black-owned business.” —Andrew Maraniss, bestselling author of Strong Inside and Games of Deception

“A smart and determined woman becomes an unlikely influence in baseball’s Negro Leagues . . . A fascinating contribution to baseball and racial history.” —Kirkus Reviews

“With a flair for bringing clarity and excitement to back office wheeling and dealing, Williams offers a potent complement to Nelson’s We Are the Ship.” —Bulletin of the Center for Children's Books

“A well-organized, detailed introduction to Effa Manley, who was the first woman inducted into the Baseball Hall of Fame.” —Booklist

"A large font, spacious page design, and well-selected black-and-white photographs—along with the fascinating history—make for an inviting read." —Horn Book

"An important hole in baseball literature is addressed in this nonfiction recollection of businesswoman Effa ­Manley’s role in the rise and fall of the Negro Leagues." —School Library Journal