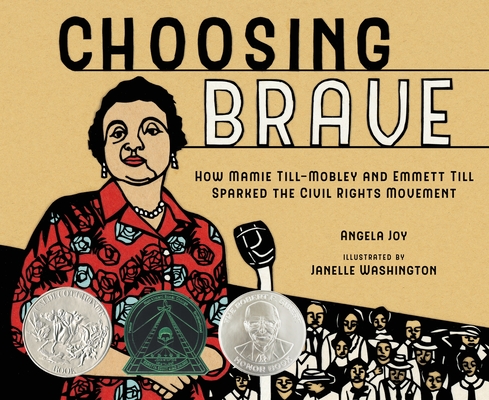 A Caldecott-honor winning picture book biography of the mother of Emmett Till, and how she channeled grief over her son's death into a call to action for the civil rights movement.

Mamie Till-Mobley is the mother of Emmett Till, the 14-year-old boy who was brutally murdered while visiting the South in 1955. His death became a rallying point for the civil rights movement, but few know that it was his mother who was the catalyst for bringing his name to the forefront of history.

In Choosing Brave, Angela Joy and Janelle Washington offer a testament to the power of love, the bond of motherhood, and one woman's unwavering advocacy for justice. It is a poised, moving work about a woman who refocused her unimaginable grief into action for the greater good. Mamie fearlessly refused to allow America to turn away from what happened to her only child. She turned pain into change that ensured her son's life mattered.

Timely, powerful, and beautifully told, this thorough and moving story has been masterfully crafted to be both comprehensive and suitable for younger readers.

Janelle Washington is a self-taught paper cut artist from Virginia. She has permanent silhouettes housed at the Smithsonian National Museum of African-American History and Culture in Washington, DC, and Downing-Gross Community Arts Center in Newport News, Virginia. She is also a member of The Guild of American Papercutters. Choosing Brave is her first picture book.

"By placing Emmett’s murder in the context of [Mamie Till-Mobley's] life, the narrative brings a deep intimacy to the portrayal of a woman mourning her son, not a symbol." —The Bulletin of the Center for Children's Books, starred review

"The heartbreaking story of Emmett Till is shared with great emotional depth... An essential purchase." —School Library Journal, starred review