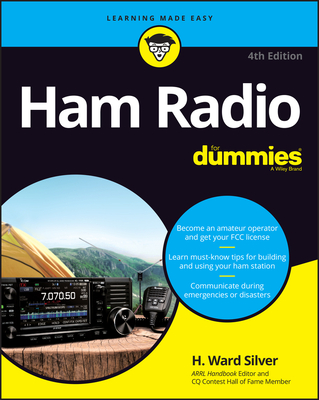 Respond to the call of ham radio

Despite its old-school reputation, amateur radio is on the rise, and the airwaves are busier than ever. That's no surprise: being a ham is a lot of fun, providing an independent way to keep in touch with friends, family, and new acquaintances around the world--and even beyond with its ability to connect with the International Space Station Hams are also good in a crisis, keeping communications alive and crackling during extreme weather events and loss of communications until regular systems like cell phones and the internet are restored. Additionally, it's enjoyable for good, old-fashioned tech geek reasons--fiddling with circuits and bouncing signals off the ionosphere just happens to give a lot of us a buzz

If one or more of these benefits is of interest to you, then good news: the new edition of Ham Radio For Dummies covers them all In his signature friendly style, longtime ham Ward Silver (Call Sign N AX)--contributing editor with the American Radio Relay League--patches you in on everything from getting the right equipment and building your station (it doesn't have to be expensive) to the intricacies of Morse code and Ohm's law. In addition, he coaches you on how to prepare for the FCC-mandated licensing exam and tunes you up for ultimate glory in the ham radio hall of fame as a Radiosport competitor With this book, you'll learn to:

Whether you're looking to join a public service club or want the latest tips on the cutting edge of ham technology, this is the perfect reference for newbies and experts alike--and will keep you happily hamming it up for years