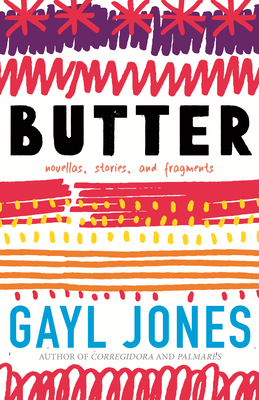 
THIS IS A PRE-ORDER - Click details below for publication date
A wide-ranging collection, including two novellas and ten stories exploring complex identities, from the acclaimed author of Corregidora, The Healing, and Palmares.

“Gayl Jones’s work represents a watershed in American literature. From a literary standpoint, her form is impeccable . . . and as a Black woman writer, her truth-telling, filled with beauty, tragedy, humor, and incisiveness, is unmatched.”
—Imani Perry, author of Looking for Lorraine and Breathe

Gayl Jones, who was first edited by Toni Morrison, has been described as one of the great literary writers of the 20th century and was recently a finalist for the Pulitzer Prize in fiction. This new collection of short fiction is only the second in her rich career and one that displays her strengths in the genre in many facets. Opening with two novella-length works, “Butter” and “Sophia,” this collection features Jones’s legendary talents in a range of settings and styles, from the hyperrealist to the mystical, in intricate multipart stories, in more traditional forms, and even in short fragments.

Her narrators are women and men, Black, Brown, Indigenous; her settings are historical and contemporary, in South America, Mexico, and the US; her themes center on complex identities, unorthodox longings and aspirations. She writes about spies, photographers, playground designers, cartoonists, and baristas; about workers and revolutionaries, about environmentalism, feminism, poetry, film, and love, but above all about our multicultural, multiethnic, and multiracial society.
Gayl Jones was born in Kentucky in 1949. She attended Connecticut College and Brown University, and has taught at Wellesley College and the University of Michigan. Her landmark books include Corregidora, Eva’s Man, The Healing (a National Book Award finalist and New York Times Notable Book of the Year), Palmares (a finalist for the Pulitzer Prize in fiction), and most recently, The Birdcatcher (National Book Award finalist).
“This collection of new and revised novellas, fragments, and short stories is as varied and diverse as the settings and the characters who inhabit them. As in her previous works, National Book Award finalist Jones explores expansive themes through the perspectives of richly drawn, fascinating characters who are often out of place and time. . . . There is a dreamlike quality as we enter the minds of these characters that is inviting and effective. Even in the briefest of fragments. . . . the reader is left feeling full and satisfied.”
—Booklist, Starred Review