We Are the Ship: The Story of Negro League Baseball (Hardcover) 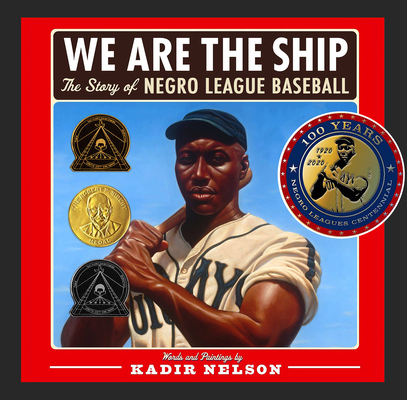 We Are the Ship: The Story of Negro League Baseball (Hardcover)

Featuring nearly fifty iconic oil paintings and a dramatic double-page fold-out, an award-winning narrative, a gorgeous design and rich backmatter, We Are the Ship is a sumptuous, oversize volume for all ages that no baseball fan should be without. Using an inviting first-person voice, Kadir Nelson shares the engaging story of Negro League baseball from its beginnings in the 1920s through its evolution, until after Jackie Robinson crossed over to the majors in 1947.

The story of Negro League baseball is the story of gifted athletes and determined owners, of racial discrimination and international sportsmanship, of fortunes won and lost; of triumphs and defeats on and off the field. It is a perfect mirror for the social and political history of black America in the first half of the twentieth century. But most of all, the story of the Negro Leagues is about hundreds of unsung heroes who overcame segregation, hatred, terrible conditions, and low pay to do one thing they loved more than anything else in the world: play ball.

Kadir Nelson is the Caldecott Medal-winning artist of The Undefeated and a two-time Caldecott Honor recipient for Moses: When Harriet Tubman Led Her People to Freedom by Carole Boston Weatherford and Henry's Freedom Box by Ellen Levine. Among his numerous other awards are three NAACP Image Awards, two Coretta Scott King Author Awards, and three Coretta Scott King Illustrator Awards. His work has appeared in many publications including The New York Times, Sports Illustrated, and The New Yorker, and his paintings are in the private and public permanent collections of notable institutions across the country, including the Smithsonian National Portrait Gallery and National Museum of African American History and Culture in Washington D.C.; The National Baseball Hall of Fame in Cooperstown; the International Olympic Committee, and the US House of Representatives. Kadir lives with his wife is Southern California, and invites you to visit him at www.kadirnelson.com.

"Nelson continues to top himself with each new book...Along with being absolutely riveted by the art, readers will come away with a good picture of the Negro Leaguers' distinctive style of play, as well as an idea of how their excellence challenged the racial attitudes of both their sport and their times."—Kirkus Reviews

"Easygoing, conversational storytelling is exactly what Kadir Nelson achieves in this pitch-perfect history of Negro League Baseball....His grand slam, though, is the art: Nelson's oil paintings have a steely dignity, and his from-the-ground perspectives make the players look larger than life."—The Horn Book

"The stories and artwork contained here are a tribute to the spirit of the Negro Leaguers who created much more than an also-ran and deserve a more prominent place on baseball's history shelves. For students and fans (and those even older than the suggested grade level), this is the book to accomplish just that."—Booklist

"Adopting the perspective and voice of an elderly ballplayer, [Nelson] offers a readable account that is infused with an air of nostalgic oral history....Nelson's brilliant, almost iconic paintings vividly complement his account.... An engaging tribute that should resonate with a wide audience and delight baseball fans of all ages."—School Library Journal

"Through text and artwork that pulses with life, Nelson has created a book that brings personality to the Negro Baseball League... One need not be a baseball fan to enjoy this book, because it's more than a sports story. It's a story of real people enduring more than many of us can imagine, playing a game they love."—Library Media Connection