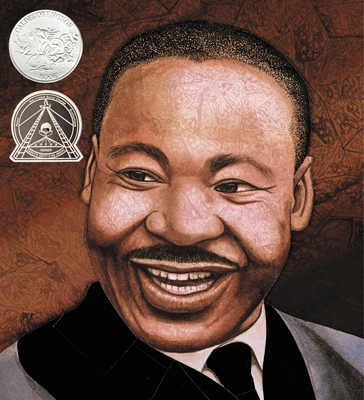 This is book number 1 in the A Big Words Book series.

Martin Luther King, Jr., was one of the most influential and gifted speakers of all time. Doreen Rappaport uses quotes from some of his most beloved speeches to tell the story of his life and his work in a simple, direct way. Bryan Collier's stunning collage art combines remarkable watercolor paintings with vibrant patterns and textures. A timeline and a list of additional books and web sites help make this a standout biography of Dr. King.
Doreen Rappaport has written numerous award-winning books for children, including Freedom Ship and The School Is Not White (both illustrated by Curtis James); Martin's Big Words: The Life of Dr. Martin Luther King, Jr., a Caldecott Honor Book and Coretta Scott King Honor Book illustrated by Bryan Collier; and John's Secret Dreams: The Life of John Lennon, also illustrated by Bryan Collier.

Bryan Collier's first book, Uptown, published in 2000, received a Coretta Scott King (CSK) Illustrator Award, as well as an Ezra Jack Keats Award. The same year, Freedom River, which he illustrated, received a CSK Illustrator Honor Award. He is the illustrator of Martin's Big Words, for which he received his first Caldecott Honor Award and a CSK Honor Award. He received his second Caldecott Honor Award in 2006, as well as another CSK Award for Rosa, written by Nikki Giovanni. He is also a New York Times bestseller with Barack Obama, written by Nikki Grimes, which reached the #1 spot in picture books during its 20 weeks on the list and received a 2009 NAACP Image Award for Best Children’s Book, and has illustrated many other acclaimed, award-winning titles.

"Beginning with the startling cover, which contains only the face of Martin Luther King Jr., with his smile broad, and his eyes crinkled in laughter, this title intrigues. It’s an homage in words and pictures, in which the author weaves King’s words with her own to present a brief but stately portrait of the American hero....Readers will hear [King's] voice echo in this presentation."—Kirkus Reviews

“Weaving in Dr. King’s own “big words,” this inspiring picture book biography celebrates this great leader as preacher and politician. Rappaport’s sparse narrative captures the essentials of the man, the Civil Rights movement he led, and his policy of non-violence. This is a great book to read aloud many times.”—Booklist