Not Norman: A Goldfish Story (Paperback) 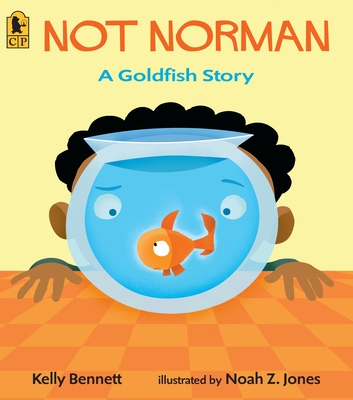 Not Norman: A Goldfish Story (Paperback)


Available to Ship from Warehouse - Ships in 3 - 6 days.
"A sweet story that could be used as a springboard to discussion of the pitfalls of making snap judgments about pets — or people." — School Library Journal

Norman the goldfish isn’t what this little boy had in mind. He wanted a different kind of pet — one that could run and catch, or chase string and climb trees, a soft furry pet to sleep on his bed at night. Definitely not Norman. But when he tries to trade Norman for a "good pet," things don’t go as he planned. Could it be that Norman is a better pet than he thought? With wry humor and lighthearted affection, author Kelly Bennett and illustrator Noah Z. Jones tell an unexpected — and positively fishy — tale about finding the good in something you didn’t know
you wanted.
Kelly Bennett loves fish. "Fish are fun and funny," she says. "Just watching them makes me laugh." When she's not writing, Kelly creates tile mosaics and digs in her garden. She has two grown children, Max and Lexi, and lives in Texas with her husband, Curtis, and their goldfish—whom she would never trade.

Noah Z. Jones loves drawing fish of all shapes and sizes, but especially smallish orange ones named Norman. This is his first children's book. He lives in coastal Maine with his wife, Diane, and their tuna-lovin' cat, Mabel.
This eye-catching book makes a satisfying read-aloud choice for pet day or any day.
—Booklist

An inventive interpretation of the old adage 'Don't judge a book by its cover,' NOT NORMAN is the perfect book for dog-resistant parents to read to their puppy-worshipping kids-as long as they're willing to take on a new goldfish or two.
—Time Out New York Kids