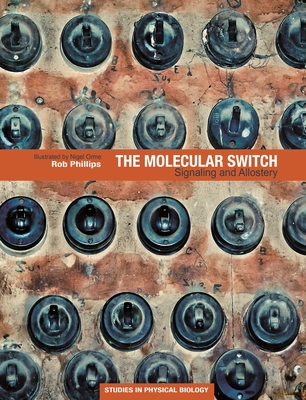 A signature feature of living organisms is their ability to carry out purposeful actions by taking stock of the world around them. To that end, cells have an arsenal of signaling molecules linked together in signaling pathways, which switch between inactive and active conformations. The Molecular Switch articulates a biophysical perspective on signaling, showing how allostery--a powerful explanation of how molecules function across all biological domains--can be reformulated using equilibrium statistical mechanics, applied to diverse biological systems exhibiting switching behaviors, and successfully unify seemingly unrelated phenomena.

Rob Phillips weaves together allostery and statistical mechanics via a series of biological vignettes, each of which showcases an important biological question and accompanying physical analysis. Beginning with the study of ligand-gated ion channels and their role in problems ranging from muscle action to vision, Phillips then undertakes increasingly sophisticated case studies, from bacterial chemotaxis and quorum sensing to hemoglobin and its role in mammalian physiology. He looks at G-protein coupled receptors as well as the role of allosteric molecules in gene regulation. Phillips concludes by surveying problems in biological fidelity and offering a speculative chapter on the relationship between allostery and biological Maxwell demons. Appropriate for graduate students and researchers in biophysics, physics, engineering, biology, and neuroscience, The Molecular Switch presents a unified, quantitative model for describing biological signaling phenomena.
Rob Phillips is the Fred and Nancy Morris Professor of Biophysics and Biology at the California Institute of Technology. He is the author of Crystals, Defects and Microstructures and coauthor of Physical Biology of the Cell and Cell Biology by the Numbers.