All Rise: The Story of Ketanji Brown Jackson (Hardcover) 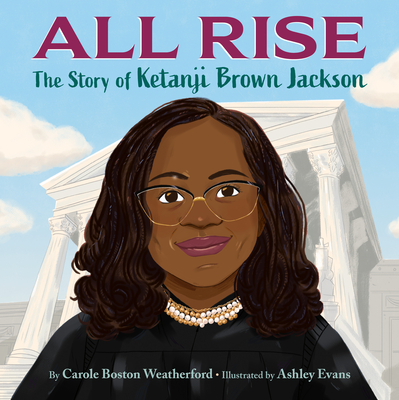 All Rise: The Story of Ketanji Brown Jackson (Hardcover)


THIS IS A PRE-ORDER - Click details below for publication date
Ketanji Brown Jackson, the first Black woman to serve on the Supreme Court, is an inspiration and role model to children of all ages. Award-winning author Carole Boston Weatherford tells her story of perseverance, dignity, and honor in this uplifting picture book biography filled with colorful and dynamic illustrations from Ashley Evans.

Whatever she did, wherever she was, Ketanji Brown Jackson rose to the top.

From the time their daughter was born, Ketanji Brown’s parents taught her that if she worked hard and believed in herself, she could do anything. As a child, Ketanji focused on her studies and excelled, eventually graduating from Harvard Law School.

Years later, in 2016, when she was a federal judge, a seat opened on the United States Supreme Court. In a letter to then-President Barack Obama, Leila Jackson made a case for her mother—Judge Ketanji Brown Jackson. Although the timing didn’t work out then, it did in 2022, when President Joe Biden nominated her. At her confirmation, Ketanji Brown Jackson became the first Black female Supreme Court justice in the United States.

Lyrical text by renowned author Carole Boston Weatherford and evocative illustrations by Ashley Evans combine to make this an inspirational and timely read.
Carole Boston Weatherford is a two-time NAACP Image Award winner and the author of Standing in the Need of Prayer (Crown BFYR, 2022) and The Faith of Elijah Cummings (RH Studio, Spring '22). She is also the author of Unspeakable: The Tulsa Race Massacre, which won the Coretta Scott King Author and Illustrator Awards, a Caldecott Honor, and a Sibert Honor; the Newbery Honor book Box: Henry Brown Mails Himself to Freedom; and the Caldecott Honor books Freedom in Congo Square, Voice of Freedom: Fannie Lou Hamer, Spirit of the Civil Rights Movement, and Moses: When Harriet Tubman Led Her People to Freedom. Born in Baltimore, Weatherford now teaches at Fayetteville State University, in North Carolina.

Ashley Evans loves creating colorful, fun, and dynamic illustrations. Born and raised in Queens, she now lives in Charlotte, North Carolina, with her boyfriend and their daughter. Ashley is the illustrator of Gabrielle Union's Welcome to the Party, Alphabet Rockers's You Are Not Alone, and Sing, Aretha, Sing! by Hanif Abdurraqib. When she’s not creating art you can find her decorating cakes, enjoying her family, or catching a much needed nap!
★ “Warmly illustrated and beautifully told.” –School Library Journal, starred review