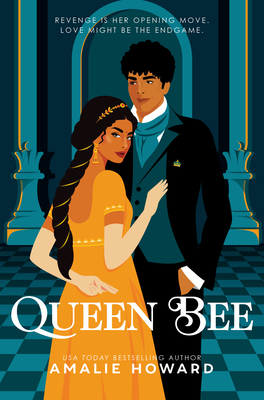 
THIS IS A PRE-ORDER - Click details below for publication date
A teen girl seeking retribution against her backstabbing former best friend finds her plans slightly derailed once she catches the eye of a familiar, handsome marquess. Bestselling author Amalie Howard delivers a delightful, anti-historical Regency-era romp that’s Bridgerton meets The Count of Monte Cristo!

Lady Ela Dalvi knows the exact moment her life was forever changed—when her best friend, Poppy, betrayed her without qualm over a boy, the son of a duke. She was sent away in disgrace, her reputation ruined.

Nearly three years later, eighteen-year-old Ela is consumed with bitterness and a desire for . . . revenge. Her enemy is quickly joining the crème de la crème of high society while she withers away in the English countryside.

With an audacious plan to get even, Ela disguises herself as a mysterious heiress and infiltrates London’s elite. But when Ela reunites with the only boy she’s ever loved, she begins to question whether vengeance is still her greatest desire.

In this complicated game of real-life chess, Ela must choose her next move: Finally bring down the queen or capture the king’s heart?
AMALIE HOWARD is a USA Today and Publishers Weekly bestselling author of historical romance, including The Beast of Beswick, The Rakehell of Roth, and Always Be My Duchess, and has penned several critically acclaimed young adult novels. She is an AAPI, Caribbean-born writer whose work has been featured in publications such as Entertainment Weekly and Oprah Daily. When she’s not writing, she can usually be found reading; being the president of her one-woman Harley Davidson motorcycle club, #WriteOrDie; or power-napping. She lives in Colorado with her family.