All Hands on Deck!: A Deadly Hurricane, a Daring Rescue, and the Origin of the Cajun Navy (Library Binding) 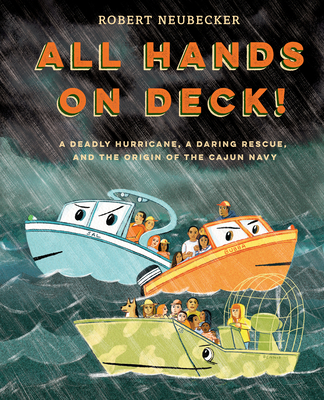 All Hands on Deck!: A Deadly Hurricane, a Daring Rescue, and the Origin of the Cajun Navy (Library Binding)


Available to Ship from Warehouse - Ships in 3 - 6 days.
A heroic tale of boats, large and small, teaming up and lending a hand in a time of need, based on the true story of a community that came together to rescue survivors of Hurricane Katrina.

When the wind is high and the barometer is low, it can mean only one thing: Hurricane! In the aftermath of a terrible storm, a coastal community is left in shambles, with thousands of people stranded on cars or rooftops. The Coast Guard is stretched to its limit, and all along the coast, schooners and sloops and speedboats wonder "What can I do? I am only one little boat." But by working together, even the littlest boats can make a difference.
Based on the true story of the "Cajun Navy" that came together in the aftermath of Hurricane Katrina and has continued to assist in rescue efforts after every major hurricane to strike the Gulf Coast in the years since, this tale of courage and community will inspire readers of all ages to step up and do their part.
ROBERT NEUBECKER draws for Slate.com, the Wall Street Journal, and the New York Times. He is the award-winning author-illustrator of Wow! City!, Wow! Ocean!, and Keith Haring: The Boy Who Just Kept Drawing. Robert lives in Park City, Utah, with his family, dogs, cats, and lizards. Visit him at RobertNeubecker.com.

"Neubecker offers a cheery “community helpers” style picture book account, with anthropomorphized watercraft and a nonspecific time setting for the focus rescue, which makes the title appropriate for group sharing among listeners with differing anxiety tolerances.” —The Bulletin

“Cartoonish watercolor, pencil, and digital illustrations lighten what could be a harrowing topic for the young audience the book targets. Neubecker’s detailed double-page spreads depict rescuers and survivors of various skin tones, accurately conveying the diversity of New Orleans.” —The Horn Book