The Aquanaut: A Graphic Novel (Paperback) 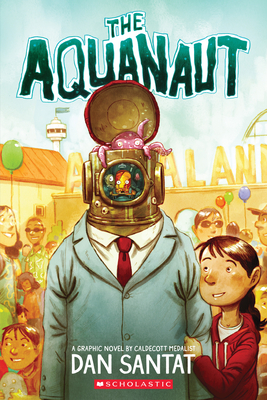 The Aquanaut: A Graphic Novel (Paperback)

“When an aquanaut breaks into the marine research center where Sofia’s uncle works, she’s shocked to find the suit is manned by goofy sea creatures. They may have a plan to save the park’s sea creatures in this delightful graphic novel.”
— Rae Ann Parker, Parnassus Books, Nashville, TN

Dive in to this whimsically adventurous graphic novel from Caldecott Medalist Dan Santat!

Ever since her father was lost at sea, Sophia has been moping around Aqualand, the marine theme park her dad and uncle created. But Sophia's world is turned upside down when an "aquanaut" breaks into the park's research lab.

To her amazement, Sophia discovers that the aquanaut is not what it seems -- inside lives a band of four goofy sea creatures! And when they all realize that Aqualand has evolved into something much darker than Sophia's dad had envisioned, Sophia is determined to help the aquanaut crew free the park's captive marine life before it's too late.

Dan Santat wrote and illustrated the graphic novel Sidekicks, and has also illustrated many acclaimed picture books, including The Guild of Geniuses and The Adventures of Beekle: The Unimaginary Friend, which won the Caldecott Medal. He lives in Alhambra, California, with his family. Visit his website at dantat.com.

"The art in this graphic tale is something special... Santat's vividly expressive visuals are, even more than usual, riveting." -- Kirkus Reviews

"A humorous and heartwarming tale." -- BookPage

"Hilarious and heartfelt... a charming and well-told tale about friendship." -- Kazu Kibuishi, creator of Amulet

"The lovable menagerie of crime-fighting pets offers lots of laughs and a boisterous and exuberant storyline; Santat's illustrations are clear, engaging, and neatly stacked into easy-to-read panels." -- Kirkus Reviews

"Lively, insightful, and just plain fun, this convergence of capes and creatures will find a wide audience in animal lovers and superhero fans alike." -- Bulletin of the Center for Children's Books