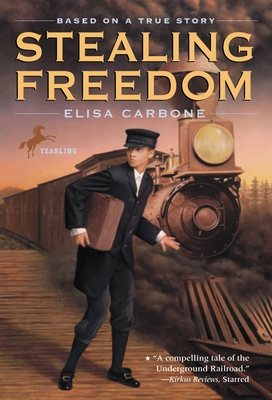 
Available to Ship from Warehouse - Ships in 3 - 6 days.
Inspired by a true story, the riveting novel of a young slave girl's harrowing escape to freedom on the Underground Railroad.

The moment Ann Maria Weems was born, her freedom was stolen from her. Like her family and the other slaves on the farm, Ann works from sunup to sundown and obeys the orders of her master. Then one day, Ann's family -- the only joy she knows -- is gone. Just 12 years old, Ann is overcome by grief, struggling to get through each day. And her only hope of stealing back her freedom and finding her family lies in a perilous journey: the Underground Railroad.

Ann Maria Weems was an actual slave who lived in the mid-1800s near the author's home in Maryland.
Elisa Carbone has lectured about Ann Maria Weems's life to teachers and historians.
"A deftly crafted story with a strong, appealing heroine." -- School Library Journal, Starred

"Imaginatively and sensitively adapted from historical records, [Stealing Freedom] will evoke admiration for the courage of both those who resisted slavery and those who endured it." -- Publishers Weekly, Starred