The Parrot and the Igloo: Climate and the Science of Denial (Hardcover) 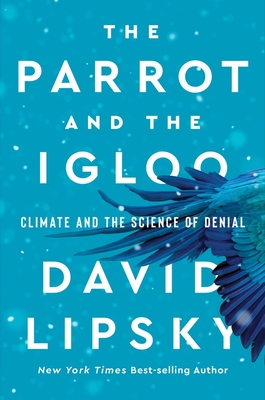 The Parrot and the Igloo: Climate and the Science of Denial (Hardcover)

The New York Times best-selling author explores how “anti-science” became so virulent in American life—through a history of climate denial and its consequences.

Climate change has become an unavoidable fact and ongoing catastrophe. The science was clear decades ago. How did so many Americans come to doubt evidence so widely accepted and compelling?

The Parrot and the Igloo is the thrilling narrative of our grand lost march: the story of the inventors (Edison, Tesla, Westinghouse) who made our world; the scientists who bravely sounded the alarm; and then the hucksters, dreamers, zealots, and crackpots who lied about that science. David Lipsky masterfully shows how climate denial grew out of early efforts to build a network of untruth about products like aspirin and cigarettes, revealing the infrastructure that allowed denier ideas to take hold, the untrue to replace the true. With narrative brio, Lipsky delivers a real-life tragicomedy—one that captures the extraordinary dance of science, money, and the American character.

David Lipsky is a recipient of the National Magazine Award and the GLAAD Media Award. His books Absolutely American and Although of Course You End Up Becoming Yourself were New York Times bestsellers. He teaches at New York University and lives in New York.