Black-and-White Thinking: The Burden of a Binary Brain in a Complex World (Hardcover) 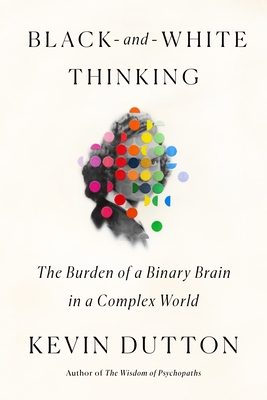 Black-and-White Thinking: The Burden of a Binary Brain in a Complex World (Hardcover)

A groundbreaking and timely book about how evolutionary biology can explain our black-and-white brains, and a lesson in how we can escape the pitfalls of binary thinking.

Several million years ago, natural selection equipped us with binary, black-and-white brains. Though the world was arguably simpler back then, it was in many ways much more dangerous. Not coincidentally, the binary brain was highly adept at detecting risk: the ability to analyze threats and respond to changes in the sensory environment—a drop in temperature, the crack of a branch—was essential to our survival as a species.

Since then, the world has evolved—but we, for the most part, haven’t. Confronted with a panoply of shades of gray, our brains have a tendency to “force quit:” to sort the things we see, hear, and experience into manageable but simplistic categories. We stereotype, pigeon-hole, and, above all, draw lines where in reality there are none. In our modern, interconnected world, it might seem like we are ill-equipped to deal with the challenges we face—that living with a binary brain is like trying to navigate a teeming city center with a map that shows only highways.

In Black-and-White Thinking, the renowned psychologist Kevin Dutton pulls back the curtains of the mind to reveal a new way of thinking about a problem as old as humanity itself. While our instinct for categorization often leads us astray, encouraging polarization, rigid thinking, and sometimes outright denialism, it is an essential component of the mental machinery we use to make sense of the world. Simply put, unless we perceived our environment as a chessboard, our brains wouldn’t be able to play the game.

Using the latest advances in psychology, neuroscience, and evolutionary biology, Dutton shows how we can optimize our tendency to categorize and fine-tune our minds to avoid the pitfalls of too little, and too much, complexity. He reveals the enduring importance of three “super categories”—fight or flight, us versus them, and right or wrong—and argues that they remain essential to not only convincing others to change their minds but to changing the world for the better. Black-and-White Thinking is a scientifically informed wake-up call for an era of increasing extremism and a thought-provoking, uplifting guide to training our gray matter to see that gray really does matter.

Dr Kevin Dutton is a Fellow of the British Psychological Society and a research psychologist at the University of Oxford. He regularly publishes in leading international scientific journals and speaks at conferences around the world. He is the author of Flipnosis and The Wisdom of Psychopaths, for which he was awarded a Best American Science and Nature Writing prize. His work has been translated into over twenty languages, and his writing and research have been featured in Scientific American, New Scientist, The Guardian, The Times, Psychology Today, The New York Times, The Wall St Journal, and The Washington Post, among other publications.

"With this book, Kevin Dutton, has provided simplifying, clarifying, and essential insights into the character of human choice and decision-making. You'll not think about thinking the same way afterward." —Robert Cialdini, Author of Influence and Pre-Suasion

"Kevin Dutton has the great gift of being able to see patterns in human behaviour . . . He talks about his discoveries, and about their implications for all of us, with the flair and clarity of a practised storyteller. Fascinating, important, and entirely convincing." —Philip Pullman