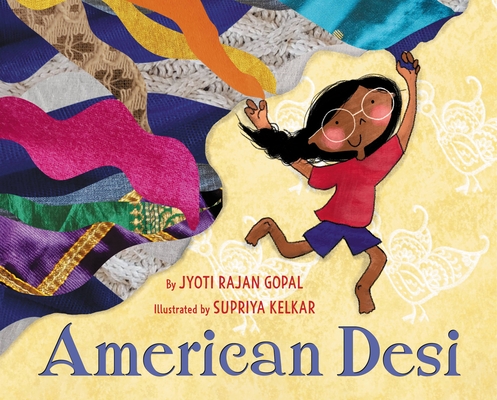 
Available to Ship from Warehouse - Ships in 3 - 6 days.
For fans of Eyes That Kiss in the Corners, this poetic story filled with expressive art empowers South Asian children living in the United States and celebrates being bicultural.

Pavadais in bright gold colors
Jersey shirts and faded jeans
Swapping, changing, feeling seen...
Which is the color of me?

A young girl longs to know where she fits in: Is she American? Or is she Indian? Does she have to pick or can she be both? With bright, joyful rhyme, and paired with an immersive art style using American and Indian fabrics, American Desi celebrates the experiences of young children growing up first and second generation Indian American: straddling the two cultural worlds they belong to, embracing all they love of both worlds and refusing to be limited by either.

This story is a powerful tribute to the joy of being South Asian and for every reader who aspires to bridge their worlds with grace, grit, and confidence.
Jyoti Rajan Gopal is a kindergarten teacher, writer, and mom who loves taking any opportunity to break out her Bollywood moves and hip-hop grooves. She grew up in Thailand, Indonesia, Myanmar, India, and China and now lives in New York City, so she knows what it feels like to be caught between multiple cultures. She chooses to embrace all her wondrous colors! This is her debut children’s book.

Supriya Kelkar grew up in the Midwest, where she learned Hindi as a child by watching three Hindi movies a week. Supriya is a screenwriter who has worked on the writing teams for several Hindi films and one Hollywood feature. She is the author of Bindu’s Bindis; American as Paneer Pie; and Strong as Fire, Fierce as Flame, among others. This is her debut illustrated book. She invites you to visit her online at www.supriyakelkar.com.
* "A perfect read-aloud for young children or an independent read for early elementary grades… What a celebration of self! This is a joyful book, for every age."—School Library Journal

"This captures the duality of a child who has strong claims to her Indian heritage and equally strong ties to the culture she is absorbing in the U.S….Sumptuous illustrations…provide the visual metaphor for the many threads that weave together harmoniously in the girl’s community."—Booklist