Numb to This: Memoir of a Mass Shooting (Paperback) 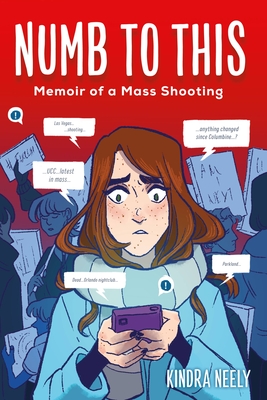 Numb to This: Memoir of a Mass Shooting (Paperback)

This searing graphic memoir portrays the impact of gun violence through a fresh lens with urgency, humanity, and a very personal hope.

Kindra Neely never expected it to happen to her. No one does. Sure, she’d sometimes been close to gun violence, like when the house down the street from her childhood home in Texas was targeted in a drive-by shooting. But now she lived in Oregon, where she spent her time swimming in rivers with friends or attending classes at the bucolic Umpqua Community College.

And then, one day, it happend: a mass shooting shattered her college campus. Over the span of a few minutes, on October 1, 2015, eight students and a professor lost their lives. And suddenly, Kindra became a survivor. This empathetic and ultimately hopeful graphic memoir recounts Kindra’s journey forward from those few minutes that changed everything.

It wasn’t easy. Every time Kindra took a step toward peace and wholeness, a new mass shooting devastated her again. Las Vegas. Parkland. She was hopeless at times, feeling as if no one was listening. Not even at the worldwide demonstration March for Our Lives.  But finally, Kindra learned that—for her—the path toward hope wound through art, helping others, and sharing her story.

Kindra Neely is an artist and writer based in southern Oregon. Her art journey began with the amazing community and encouragement she received at Umpqua Community College. She took her first drawing class Drawing Nature at UCC and still likes to hike the trails regularly to sketch flowers and ferns. Numb to This is her debut graphic novel.


“I started Numb to This right before the shootings at the grocery store in Buffalo. I finished it the day before the shootings at the elementary school in Texas. Kindra Neely’s graphic memoir reminds us that mass shootings leave far more victims than just the people who end up in caskets. This searing, raw, and honest account offers a window to those who want to empathize, and a mirror for those of us who may find ourselves in her shoes.”—April Henry, New York Times bestselling author of Girl, Stolen