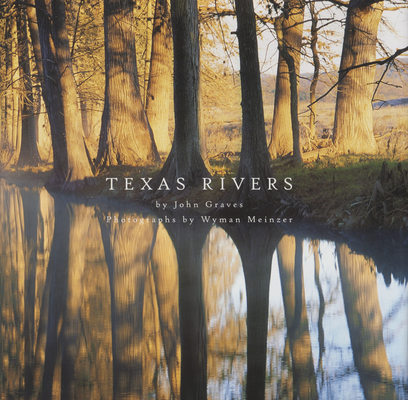 In Goodbye to a River, John Graves defined what it means to know a river—as a real place, as a landscape of memory and imagination, and as "a piece of country, [that] hunted and fished and roamed over, felt and remembered, can be company enough." Readers who've taken the canoe trip down the Brazos with him have long wished to travel other rivers with John Graves. Those journeys now begin in Texas Rivers.

This book marries the work of two Texas legends. John Graves brings to Texas Rivers his ability to weave history, geography, and culture into a vibrant portrait of a land and its people. Through photographs of rare beauty, Wyman Meinzer reveals the rivers as few will ever see them in person, distilling decades of experience in capturing light on film into a tour de force presentation of Texas landscapes.

In essays on the Canadian, Pecos, Llano, Clear Fork of the Brazos, Neches, and Sabinal rivers, Graves captures the essence of what makes each river unique. While the Canadian is a river of the plains that runs through big ranch country, the Neches is a forest stream heavily impacted by human encroachment. The Llano and the Sabinal remain largely unspoiled, though the forces of change ebb and flow about them. The Pecos shows ripples of its Old West heritage, while the Clear Fork of the Brazos flows through country still living in those times. Meinzer's photographs offer a stunning visual counterpoint to Graves's word portraits, and, together, they show clearly that rivers have been central to the development of the unique character of Texas.

John Graves (1920–2013) lived and wrote in Glen Rose, Texas, in the Hard Scrabble country that inspired so much of his work. A recipient of many honors for his writing (including a National Book Award nomination for Goodbye to a River), he is a former president of the Texas Institute of Letters and a past holder of a Guggenheim and a Rockefeller Fellowship.

Wyman Meinzer has published numerous books of photographs of Texas and has the distinction of having been named Texas State Photographer by the Texas Legislature. His work appears in magazines nationwide; he is a frequent contributor to Texas Highways and Texas Parks & Wildlife.