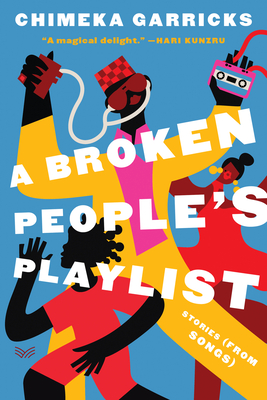 
THIS IS A PRE-ORDER - Click details below for publication date

"A dozen interlinked, music-oriented stories set in Port Harcourt, Nigeria, where Garricks was raised... Each songlike story feels like a breakout hit encapsulating the brokenness and the beauty in life’s soundtrack."—Booklist, starred review

A Broken People’s Playlist is set to the soundtrack of life, comprised of twelve music-inspired tales about love, the human condition, micro-moments, and the search for meaning and sometimes, redemption. It is also Chimeka Garricks’s love letter to his native city, Port Harcourt, introducing us to a cast of indelible characters in these loosely interlocked tales.

There is the teenage wannabe-DJ eager to play his first gig even as his family disastrously falls apart—who reappears many years later as an unhappy middle-aged man drunk-calling his ex-wife; a man who throws a living funeral for his dying brother; three friends who ponder penis captivus and one’s peculiar erectile dysfunction; a troubled woman who tries to find her peace-place in the world, helped by a headful of songs and a pot of ginger tea.

Infused with the author’s resonant and evocative storytelling, each page holds “the depth of a novel” (Hari Kunzru); a character, a moment that will—like a favorite song—long linger in the heart and mind.

Chimeka Garricks is a Nigerian Irish lawyer, editor and writer, born in Dublin and raised in Port Harcourt. He would rather choose soundtracks for movies or be a DJ, but is at work on a novel. He lives in Lago, Nigeria.

"A dozen interlinked, music-oriented stories set in Port Harcourt, Nigeria, where Garricks was raised... Each songlike story feels like a breakout hit encapsulating the brokenness and the beauty in life’s soundtrack." — Booklist (starred review)

"This is a beautifully woven set of short stories, each of which are inspired by a beloved pop song.... It’s a compelling format with little margin for error and which, if executed correctly, works to magnificent effect. Thankfully, Garricks is a supreme storyteller, and he manages to take us on an absorbing tour of joy and loss. Each of his tales is to be savoured; each concept has the depth of a novel... a magical delight." — Hari Kunzru, award-winning author of White Tears

"A Broken People’s Playlist is an addictive collection of authentic prose. Story after story made me stop to reflect on the complexities of life, our various loves––be it family, friendship or romance––and the way we’re all connected. Elegant, graceful and full of understanding, Garrick’s writing unwraps stories that touch the soul and make you glad to be part of the human race." — Bisi Adjapon, author of The Teller of Secrets and Daughter in Exile