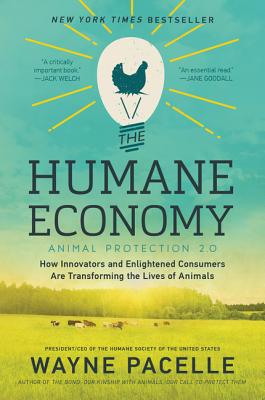 By Wayne Pacelle
Email or call for price

From the leader of the nation’s most powerful animal-protection organization comes a frontline account of how conscience and creativity are driving a revolution in American business that is changing forever how we treat animals and create wealth. Wayne Pacelle of the Humane Society of the United States reveals how entrepreneurs, Fortune 500 CEOs, world-class scientists, philanthropists, and a new class of political leaders are driving the burgeoning, unstoppable growth of the “humane economy.”

Every business grounded on animal exploitation, Pacelle argues, is ripe for disruption. Indeed each one of us is, and will be, touched by this far-reaching transformation in food and agriculture; in the pharmaceutical, chemical, and cosmetics industries; in film, television, and live entertainment; in tourism and wildlife management; in the pet trade for dogs and cats and exotic wildlife; and in fur and leather fashions. Collectively it promises to relieve or end the suffering of billions of creatures, while allowing businesses aligned with the best instincts and values of their customers to flourish.

Pacelle shows, for instance, how the cruelties of industrial chicken farming are quickly becoming obsolete with a visit to Hampton Creek, the makers of a plant-based egg substitute and the world’s fastest-growing food startup ever.  Pacelle also recounts the stories of how established companies are joining in this economic transformation: from Petco and PetSmart, which have turned the conventional pet store model on its head by forswearing puppy mill suppliers in favor of shelter dogs; to John Paul Mitchell Systems, the Body Shop, and Lush, which use safe ingredients instead of animal tests for their cosmetics; to major food retailers like Whole Foods, Chipotle, and even Costco and Walmart, which are embracing animal welfare standards that are one by one unwinding the horrors of the factory farm.

The Humane Economy is a clarion call to business leaders and to the world’s growing animal protection movement; it is equally a warning to the static thinking of animal-use industries and their apologists: “Here, in this humane economy,” Pacelle argues, “human ingenuity meets human virtue, and we discover at last that we can have it both ways — a better world for us and for animals, too.”

As president and CEO of The Humane Society of the United States (HSUS), Wayne Pacelle leads the largest and most effective animal protection organization and one of the most dominant, high-impact non-profit groups of any kind. Placing special emphasis on transforming public policies and corporate behavior, he has been a primary strategist in securing the enactment of hundreds of state and federal animal-protection laws and helped drive reforms adopted by many of America’s biggest for-profit companies.  He’s been named an “Executive of the Year” by The Non-Profit Times; a contributor to influential newspapers and magazines, including Foreign Affairs; and author of the New York Times bestseller The Bond: Our Kindship with Animals, Our Call to Defend Them. His blog, A Humane Nation, is published each weekday.  He received his B.A. in history and environmental studies from Yale University in 1987. Pacelle lives in Maryland with his wife Lisa Fletcher, a journalist, and their dog Lily and cat Zoe.

“The Humane Economy is a brilliant book that celebrates the truth: our economic wellbeing is inextricably linked to the wellbeing of animals. This book is an important moral and pragmatic blueprint for humane, enlightened prosperity for all.”
— U.S. Senator Cory Booker

“Invigorating. ... Pacelle has accomplished remarkable things with his business-friendly, non-confrontational approach, and anyone concerned with the lives and deaths of animals should be grateful he’s out there.”
— Salon

“[A] fascinating read about big thinkers, investors and others who are seeking new ways of doing business with less animal suffering.”
— Kathleen Parker, Chicago Tribune

“[An] excellent new book. ... This is a humane revolution, and Pacelle... has been at the forefront of it. ... At a time when the world is a mess, Pacelle outlines a hopeful vision.”
— Nicholas Kristof, New York Times

“Essential reading for anyone interested in animal welfare. This fabulous book reveals the inside story of how the fight against human cruelty to animals is gradually being won. A fascinating, highly readable, and remarkably comprehensive book.”
— Jane Goodall, PhD, DBE, Founder of the Jane Goodall Institute & UN Messenger of Peace

“A critically important read for anyone who cares about business succes or animals -- or, like so many of us, both.”
— Jack Welch, founder of the Jack Welch Management Institute

“The Humane Economy reminds us that in order to reach their highest ethical potential, businesses must embrace the values of protecting animals and eliminating cruelty. I recommend this book to every consumer and corporate CEO. It’s a 21st century blueprint for both conscious business and social progress.”
— John Mackey, co-CEO and founder, Whole Foods Market

“The Humane Economy traces the economic impact of the public’s concern for animals across a wide range of animal abuses.”
— Peter Singer, The New York Review of Books

“An important book. I would urge you to purchase it and learn for yourself how the welfare of animals is changing the world.”
— Cathy Kangas, Huffington Post

“Shines a light on the ways leaders are stepping up, innovating, and transforming the economy to make the world a better place--for humans and for animals.”
— Mark R. Tercek, President and CEO of the Nature Conservancy, America's largest environmental charity

“A beacon of hope… [and] a must-read book.”
— Chattanooga Pulse

“[In] a hopeful follow-up to his 2011 best seller, The Bond, Pacelle explores how innovative entrepreneurs, Fortune 500 CEOs, and scientists are rallying around this social movement and leading us forward by eliminating cruel historic practices.”
— Philadelphia Style

“Pacelle presents impressive evidence of successful campaigns that have helped reduce the suffering of many nonhuman animals. ... These victories are real, and more will follow.”
— Foreign Affairs

“An eloquent new book... by the innovative president/CEO of The Humane Society of the United States, Wayne Pacelle.”
— Georgie Anne Geyer, The Auburn Citizen

“For anyone who cares about an issue, but thinks it’s too big or unwieldy to ever make a dent, Pacelle’s approach to animal welfare will be inspirational.”
— Michael Ian Black, How to Be Amazing

“[Pacelle’s] book is a call to clothe, feed, and entertain people without victimizing animals.”
— Forbes

END_OF_DOCUMENT_TOKEN_TO_BE_REPLACED

This feature require that you enable JavaScript in your browser.
END_OF_DOCUMENT_TOKEN_TO_BE_REPLACED

This feature require that you enable JavaScript in your browser.
END_OF_DOCUMENT_TOKEN_TO_BE_REPLACED

This feature require that you enable JavaScript in your browser.
END_OF_DOCUMENT_TOKEN_TO_BE_REPLACED