God, If You're Not Up There...: Tales of Stand-up, Saturday Night Live, and Other Mind-Altering Mayhem (Paperback) 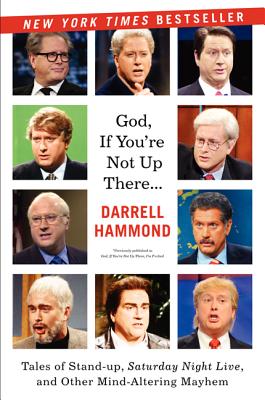 God, If You're Not Up There...: Tales of Stand-up, Saturday Night Live, and Other Mind-Altering Mayhem (Paperback)

As seen in Netflix's "Cracked Up: The Darrell Hammond Story", this groundbreaking memoir is a raw look inside the troubled life and mind of an American comic genius.

By turns poignant and hilarious, Hammond takes readers from the set of Saturday Night Live, where he was the show’s longest-tenured cast member, to the drug-ridden streets of Harlem and into the twisting corridors of his own unflaggingly humorous consciousness. Mingling behind-the-scenes stories from television’s best-loved comedy series with a dark look inside a world-class funnyman, God If You’re Not Up There, I’m F*cked is a book sure to resonate with anyone who shares a talent for performance, a love of comedy, or a desire to know how an artist can climb from the deepest despair to the very top of his profession.

Darrell Hammond is an award-winning actor and comedian who was a Saturday Night Live cast member for a record-setting fourteen years. He has also appeared on Broadway and in the dramatic television series Damages and Law & Order: Criminal Intent. He recently received critical acclaim for his starring role in the one-man play Tru. He lives in New York City

“Hammond’s moving memoir contains surprising detours. . . . [His] breezy style and facile storytelling will keep readers entertained even while reading about his struggle with alcoholism. . . . This funny man’s serious life can be an inspiration to all.” — Publishers Weekly (Starred Review)